What is an NFT?

A non-fungible token, or “NFT,” is a piece of data (a token) on a blockchain that is linked to a digital or physical asset. As explained above, an NFT token is similar to a cryptocurrency token, in that each token is uniquely identifiable, is generally owned by a single address on the blockchain, and can easily be exchanged using transactions on the blockchain. Bitcoin and Ether tokens are referred to as cryptocurrency tokens, which means that they are the native form of exchange and value on their own particular blockchain. NFTs exist on the same blockchains as these cryptocurrencies, but each blockchain may contain many different types of NFTs.

NFTs also differ from cryptocurrencies because each NFT is linked to a particular asset. This asset might be a unique work of digital art, such as the Beeple NFT described below. Alternatively, a family (or "collection") of NFTs might be created that link to similar digital assets, such as the well-known Bored Ape collection of NFTs. Each NFT in this collection links to a different, but highly similar, digital representation of an ape.

NFTs can also be used to represent non-artistic assets, in both virtual worlds and in the real world. In either case, the ownership of the NFT on the blockchain is then used to identify the owner of the related asset. For example, a seller of physical objects (such as collectable sneakers) might create a separate NFT for each object that they have for sale. When an object is purchased, ownership in the related NFT is transferred to the new owner. This allows for ownership transfer even if the physical object remains in a secure storage facility. If a person wishes to collect the physical object, they must prove their ownership by proving that they own the associated NFT. In an online world, virtual assets are also associated with NFTs. Programming that operates the virtual world verifies the ownership of the virtual asset by identifying the owner of the associated NFT. All of these examples utilize the ability of a blockchain to easily create an NFT, identify an original owner, and then allow a simply transfer of ownership of that NFT to a new owner.

While NFTs are clearly similar to cryptocurrencies, one fundamental difference is that NFTs are not fungible (as they are, of course

How are NFTs created?

In most cases, an NFT is created using a smart contract. A user that wants to create a new NFT will submit a digital file or asset (such as a digital artwork) to an NFT smart contract and pay the necessary fee (in Ethers, for example). A typical cost for creating a new NFT token on the Ethereum blockchain is about $70 of gas.

In most cases, the digital asset will not be inserted into the NFT itself. Rather, the asset will be stored in a fixed location in off-blockchain storage, and the NFT will contain a pointer to that location. If the NFT is associated with a real-world asset, a digital description or identifier for that physical asset is stored in that off-blockchain storage location. An NFT, then, is a piece of digital data (a token), created by a smart contract and stored on a blockchain, that includes a token identifier, an identifier for the smart contract that created it, and a pointer to a digital asset: 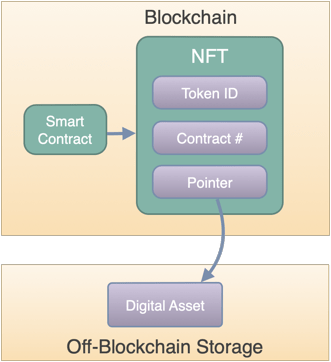 NFTs are frequently associated with digital art works. For example, the digital work “Everydays: The First 5000 Days” by the digital artist Beeple was auctioned off as an NFT by Christies for over $69 million (actually, 42,329.453 Ether) in March 2021. The artwork is a composite (below) of 5000 images created by the artist over thirteen years, with the second image showing one of the works that depicted former Vice President Mike Pence, which was created after a fly landed on Mr. Pence’s head during a televised debate. 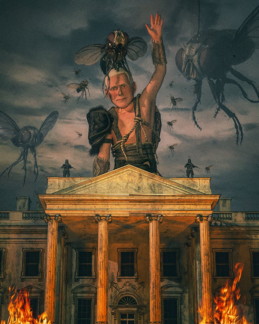 At the conclusion of this auction, an NFT with a Token ID of 40913 (created on the Ethereum blockchain by the MakersTokenV2 smart contract) was associated with a new owner. Like most NFTs, this token did not contain the digital work itself. Since the composite work was more than 300 megabytes in size, it would have cost about $5 million in gas costs (see Bitlaw's discussion on gas) to insert the entire artwork into the blockchain. Rather, the digital artwork was sent through a hashing algorithm to create the following string: “QmXkxpwAHCtDXbbZHUwqtFucG1RMS6T87vi1CdvadfL7qA”. Because of the way hashing algorithms work, no other digital file can create that string, and this digital file will always create that string when sent through the algorithm.

This hash string was also not found on the blockchain. Rather, a link to a file containing metadata on the InterPlanetary File System (IPFS) was included in the NFT. The IPFS is itself a distributed file/storage system that uses multiple, peer servers to maintain a world-wide (not quite yet interplanetary) file system. This system uses hash values in place of file names. The metafile itself includes an IPFS link to a copy of the artwork file. The NFT and its link to the metafile on the IPFS looks something like this:

The Beeple NFT was not auctioned on the blockchain. Rather, Christies auctioned the NFT offline, collected the payment, took its cut, and sent the rest of the payment to the artist. The artist than manually transferred the NFT for zero Ether on the Ethereum blockchain. NFTs can also be auctioned off through smart contracts. To accomplish this, ownership of the NFT would be transferred to the auction smart contract, and the auction smart contract would receive bids, determine the winner of the auction, transfer crypto currency in the amount of the winning bid from the bidder to the original owner (after taking its cut), and finally transfer ownership of the NFT to the winning bidder.

Rights Granted by Ownership of an NFT

The sale of the NFT may or may not also involve additional rights in the work. While the sale will certainly require that the change of ownership in the NFT be recorded in the blockchain, and will typically include the right to download the copy of the work, one should consider whether the sale in the NFT includes the following elements as well:

Note that these rights are not enforced by the smart contract, but by “non-smart” entities such as lawyers and courts. As for the Beeple auction, it is unclear whether the winning bid received anything other than the right to control and transfer token ID 40913 using the MakersTokenV2 smart contract on the Ethereum blockchain.

Please see Dan Tysver's bio and contact information if you need any NFT-related legal assistance. Dan is a Minnesota-based attorney providing intellectual property advice on NFT issues to clients across the country.